How the RIPE100 Plan Offers a New Path Forward

American producers have a pivotal role to play in tackling climate change, but they shouldn’t sacrifice their own prosperity in the process. RIPE (Rural Investment to Protect our Environment) advocates for national policy that invests simultaneously in comprehensive climate mitigation, and the people and businesses of rural America to garner bipartisan support. Our plan is uniquely designed to ensure that climate policy will not hamper producer profitability, offering a path to involve farmers and ranchers as true champions of climate policy as part of a broader bipartisan climate coalition to improve American producers’ financial and environmental sustainability.

While producers have long supported the opportunity to be compensated for carbon farming with voluntary programs and markets, most do not support comprehensive climate policy because the policies proposed thus far will negatively impact their economic viability.

Climate policy increases producers’ input costs — such as fertilizer and fuel — by around $10-$30 per acre. Many producers are already operating at a net loss, so expecting them to endorse policies that will harm them further is not fair nor realistic.

The Biden administration and Congress have made it clear they plan to introduce sweeping climate policies across the U.S. economy, including the agriculture sector. A core proposal circulating in Washington, D.C., is to offer producers carbon farming payments valued at $20 per ton of avoided greenhouse gas emissions, which translates to around $12 per acre for most stewardship practices.

A $12 per acre payment level does not cover the cost of adopting most emissions-cutting practices (e.g. $38 per acre for cover crops) nor the raised input costs caused by climate policy (e.g. $10-$30 per acre), leaving most farmers and ranchers further in debt.

Carbon farming payments alone rarely cover the cost of adopting the practice, so it will lead to low levels of practice adoption and continued lack of support from the farming sector for climate policy.

Citations for the figures can be found in our white paper on RIPE100. 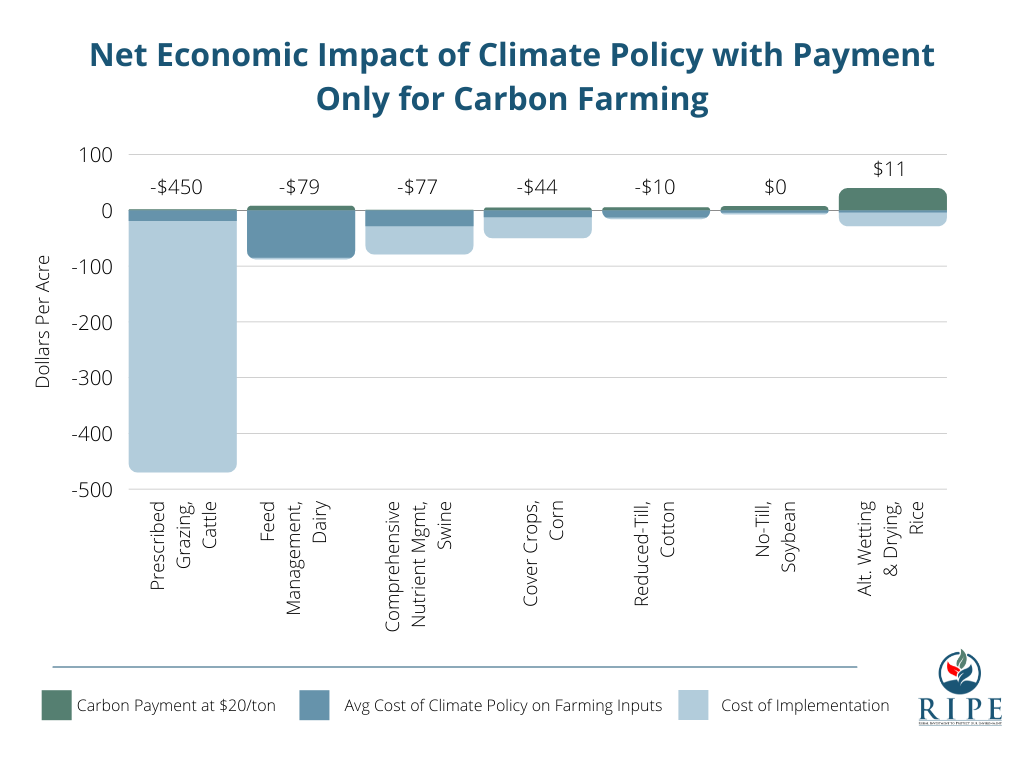 The chart above further illustrates that a carbon sequestration payment of only about $12 per acre would not even cover the cost of adopting the detailed practices, let alone compensate farmers for broader climate policy costs such as higher input costs, yield losses, climate and adaptation costs, and practice verification costs. 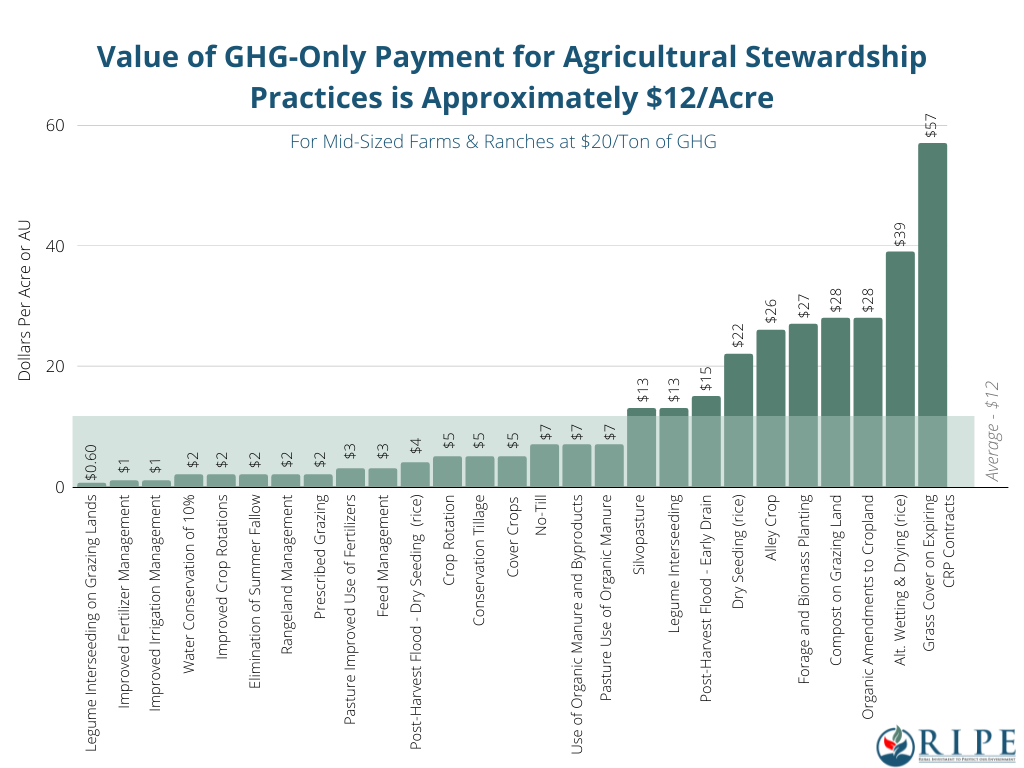 The chart above illustrates that a price of $20 per ton of GHG offers most farmers an average payment potential of around $12 per acre. This average value is based on a review of most of the practical “carbon farming” practices such as cover crops or no-till. Despite the variability based on regional differences and farm size, typical carbon sequestration potential is approximately 0.5 tons per acre for working land practices, which translates into $12 per acre.

RIPE supports private carbon markets in addition to a government program investing in producers’ voluntary stewardship practices at rates that fairly reflect their environmental benefits to water, soil health, pollination and other environmental services. In order to facilitate participation by U.S. farmers and ranchers to address climate and other environmental challenges, stronger incentives must be provided beyond what carbon payments alone can deliver. Aligning public payments with the value that producers deliver to the wider set of environmental benefits offers a win-win solution farmers, ranchers and the public.

RIPE100 is a proposal to directly pay producers a minimum of $100 per acre or animal unit for voluntary land stewardship that can provide a greater benefit to the public through carbon sequestration, improved soil health, cleaner water, water conservation, flood mitigation, pollination, biodiversity and other environmental services. This approach is supported by many program precedents and volumes of peer-reviewed research, and offers producers adequate incentive to adopt key conservation measures.

By aligning payment terms with the combined environmental benefits that producers deliver to the public, RIPE100 ensures farmers and ranchers are fully protected from climate policy costs and transforms climate policy into a profit opportunity that benefits producers and the environment. 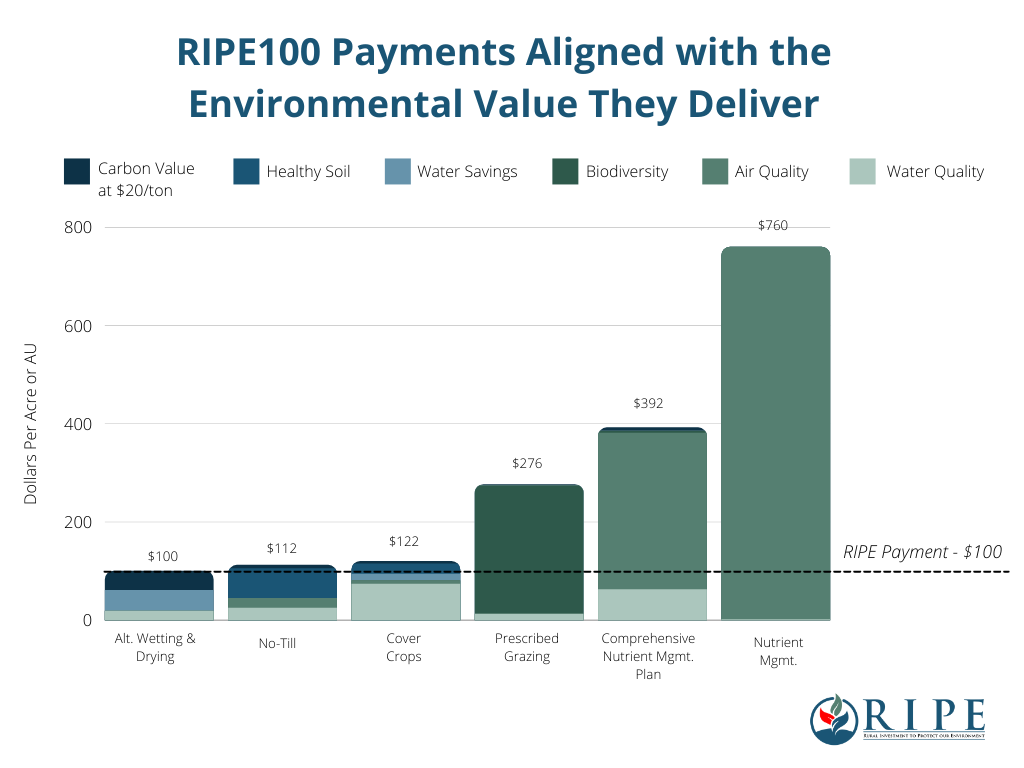 While only 43% of rural citizens support government spending on climate, that support jumps to 93% for public investments in farmer incentives to improve water and soil health.

We therefore can expect rural citizens and policymakers to be more likely to support comprehensive climate policy that is framed around farmer incentives for adopting stewardship practices.

A climate policy that expands beyond the narrow lens of greenhouse gas reduction and includes the conservation of water, soil, and other shared natural resources that tangibly impact citizens will garner wider public support and will have greater environmental benefits.