How much money is RIPE proposing for farmers and ranchers?

RIPE is proposing that ag producers earn in the range of $100 per acre or animal unit for voluntary stewardship practices such as cover crops, manure separation, or managed grazing.

Does the policy stipulate a cap on enrolled acres?

No. Once the plan becomes policy, farmers will be able to enroll unlimited acres. In a pilot stage, acreage may be limited based on funding levels.

Why do we need a new USDA program?

There are many great aspects to existing USDA conservation programs, and RIPE seeks to draw upon most of the existing elements, such as stewardship practice protocols and farmer self-verification. However, none of the working land programs are sufficient to achieve the goals outlined in this white paper, because they do not compensate at levels that reflect the public benefits delivered, and the rates do not even fully compensate the expenses farmers incur from practice adoption and opportunity loss.

The USDA Environmental Quality Incentive Program (EQIP) provides payments for working land stewardship practice adoption that are based on implementation costs, not value of public benefits. EQIP payments rarely cover the full cost of implementation nor the costs associated with foregone income and maintenance. The Conservation Stewardship Program (CSP) is another USDA conservation program that has helped advance conservation on farm, forest, and ranch lands across the U.S. RIPE follows the CSP precedent of compensating early actors for their environmental outcomes. However, CSP has an administratively complex enrollment process that prevents many farmers, especially small farmers who do not have spare capacity to work on complex forms, from participating. It also has payment limitations that are restrictive for large farms preventing them from enrolling most of their operations and therefore preventing larger environmental impacts. CSP selects participants with a ranking system that favors farmers who have already adopted conservation practices, which would make it less equitable for the 80% of farmers who have not yet adopted conservation practices.

RIPE100 is a new conservation program that fully compensates farmers, provides them with profitable compensation reflecting the environmental benefits they deliver, and allows for simplified enrollment of many more farms. RIPE’s proposal replicates many parts of existing conservation programs, including the set of existing protocols for practices and USDA technical expertise, to avoid unnecessary administrative costs.

Given the rapid pace that President Biden’s Administration and Congress are moving to roll out a wide range of climate-related programs and policies, there is a significant opportunity to advance the RIPE100 concept within a wide range of funding vehicles in early 2021. Monies should come from new or unallocated funds as not to jeopardize existing programs that deliver valuable services. This program is designed to scale up easily. Funding for Phase 1 of the program could come from any combination of the following:

Funding for Phase 2 of the program could come from a comprehensive climate legislative package or any of the any of the above vehicles, aside from the one-time recovery bills.

Why are carbon farming payments not enough?

The cost of a climate policy on agricultural inputs plus the cost of stewardship practice adoption will total around $67/acre for many producers. Carbon farming payments will only deliver around $17/acre to growers (at a carbon price of $50/ton), leaving producers with a net loss. However, farmers and ranchers who adopt stewardship practices are delivering public benefits around $100-$300/acre when stacking the ecosystem services such as soil health, climate, water quality, biodiversity, and more.

RIPE advocates for allowing producers to earn the stacked ecosystem service value of their voluntary practices, delivering value to the public and the grower.

Across the biggest commodities in the U.S. agricultural economy, the average cost of a climate policy would be $52 per acre. When looking across the spectrum of carbon farming practices, the average value is around $48 per acre, leaving most growers with a net loss. But that includes practices that most producers would likely not implement, such as biochar. If we only include practices that are popular with producers, then the average per-acre payment drops to $12. For most farmers and ranchers, the math of carbon farming payments alone simply doesn’t work.

How does RIPE differ from Indigo Ag or Ecosystem Services Market Consortium?

RIPE is supportive of the great contributions provided by IndigoAG, Ecosystem Services Marketplace Consortium (ESMC), and other private market organizers for environmental markets. We have established through engagement with industry and technical experts that there is no technical conflict between the RIPE proposal and private markets. RIPE100 complements these markets by allowing farmers to retain their environmental assets and sell them to private actors. RIPE both builds on the work of the private market and differs in the following ways:

How does RIPE differ from other farmer-led coalitions focused on climate policy?

Several major agricultural trade groups have recently launched coalitions that are dedicated to evaluating various climate policy proposals and advancing a climate policy that is in the best interest of agriculture. The main differences between RIPE and most of those groups are that RIPE:

We believe most other ag-climate groups will be interested in adopting this type of approach, and we invite collaboration.  RIPE looks forward to engaging coalition members and other interested stakeholders with detailed briefings of the Roadmap for their consideration. If your trade group is part of a coalition and would like a briefing to learn more, please contact us.

For more information about how RIPE compares to other organizations and policies relating to ag and climate, please visit our Resource Page for Organizational and Policy Landscape.

How does RIPE help farmers adapt to climate change?

U.S. farmers will be significantly affected by climate change’s rising temperatures, floods, droughts, and pests – and may lose up to $5 billion annually. For example, beef cattle farmers are projected to lose $44 million annually due to increased temperatures, while rice farmers may lose up to 20% of their annual yield by 2050. The RIPE Roadmap payments can help farmers afford to invest in the adaptation changes they need, such as –  cover cropping, which help manage fluctuations in water supplies; and improved air conditioning systems for livestock operations.

How does RIPE compare with carbon farming or offset proposals?

The key distinction is that carbon farming and offset proposals pay farmers ONLY for the greenhouse gas value of their practices, which is typically in the $1-10/acre for most climate-smart practices, at a $20/ton of carbon price. Yet the cost of a climate policy on farmers averages roughly $30/acre from higher energy and fertilizer costs, at that carbon price. Carbon farming payments are better than nothing, but since most farmers are still left at a net economic loss, we prefer a better deal that recognizes the tremendous value farmers and ranchers can contribute to our environmental benefits when considering the climate, water, soil, and other ecosystem services.  Another difference with carbon farming payments is that RIPE’s proposed payments avoid “additionality” requirements – such as strict and costly verification demands, and penalizing early actors – because it is not an environmental quality market mechanism but rather an independent USDA program based on program-wide values.

Can ranchers who lease land from the Bureau of Land Management participate in the RIPE100 program?

RIPE100 is designed to allow all farmers and ranchers to participate, including those who use BLM lands for grazing.

BLM requires renters to specify their practices in the lease, so ranchers must check their lease to ensure the allowance of new practices they would like to adopt. The RIPE100 proposal includes practices such as cover crops on grazing lands, riparian forest buffers, filter strips, livestock forage and biomass planting, riparian herbaceous cover, nutrient management plans (state or national protocols), and maintaining native grasslands. These practices have also been approved by BLM in ranching leases, when requested. If the lease does not include these or similar practices, ranchers can integrate them when renegotiating their lease with BLM, thus enabling participation in RIPE100.

Additionally, RIPE supports partnering with ranchers and ranching associations to engage BLM in amending its regulations to allow ranchers to add conservation practices prior to their lease renewals, based on the precedent that BLM encourages permit holders to be stewards of the land they rent.

Yes. RIPE’s proposal helps with flooding by investing in farm practices that mitigate flooding and by compensating farmers fairly for those efforts. Farmers would be compensated for the value of their flood mitigation efforts when they adapt stewardship practices. 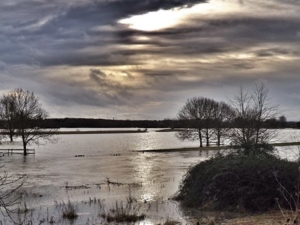 Practices likely to be compensated by RIPE’s proposal include cover crops, reduced tillage, rotational grazing, and silvopasture. All of these practices hold soil in place during flooding events, in turn preventing sedimentation in waterways and overland flow. Stewardship practices lessen the effects of flooding and reduces the amount of standing water on fields and pastures.

In addition, flooding pollutes waterways. Pesticides and fertilizers, carried as runoff, damage fishing and recreation, as well as aquatic and terrestrial biodiversity. RIPE supports nutrient management, which lowers the nitrogen and phosphorus applications to soil, to protect the health of neighboring waterways.

Furthermore, RIPE’s proposed federal fund could support riparian buffers, particularly wooded buffers, which may be the most effective agricultural tool for flood mitigation. Buffer plants stabilize streambanks, slow sediment-laden runoff, and absorb the pollutants attached. In fact, riparian buffers along the Missouri River were estimated to reduce damage by almost half during a large flood in 1993. Buffers absorb rainwater and restore groundwater levels, while slowing runoff release, thereby reducing the intensity and frequency of flooding events.

How can I get involved with RIPE?

We welcome your involvement!

To learn more, and explore possibilities to serve as an advisory committee member or ad-hoc advisor to RIPE, please visit our get involved overview page to see the many opportunities we have for you to participate in and support RIPE. In particular, RIPE is creating new and exciting opportunities for growers at every level to get involved in their state and nationally.

You can keep up to date with RIPE news by following us on Twitter and signing up to receive our newsletter via the form on this page.

What is the stacked ecosystem service value?

RIPE proposes paying farmers in alignment with the stacked ecosystem service value of stewardship practices, which averages around $100/acre. Farmers would be paid not just for their carbon, but also for the water quality, air quality, biodiversity and other ecosystem services they provide. As illustrated in the chart below, the value to the environment and society from one acre that is sustainably farmed is significant. 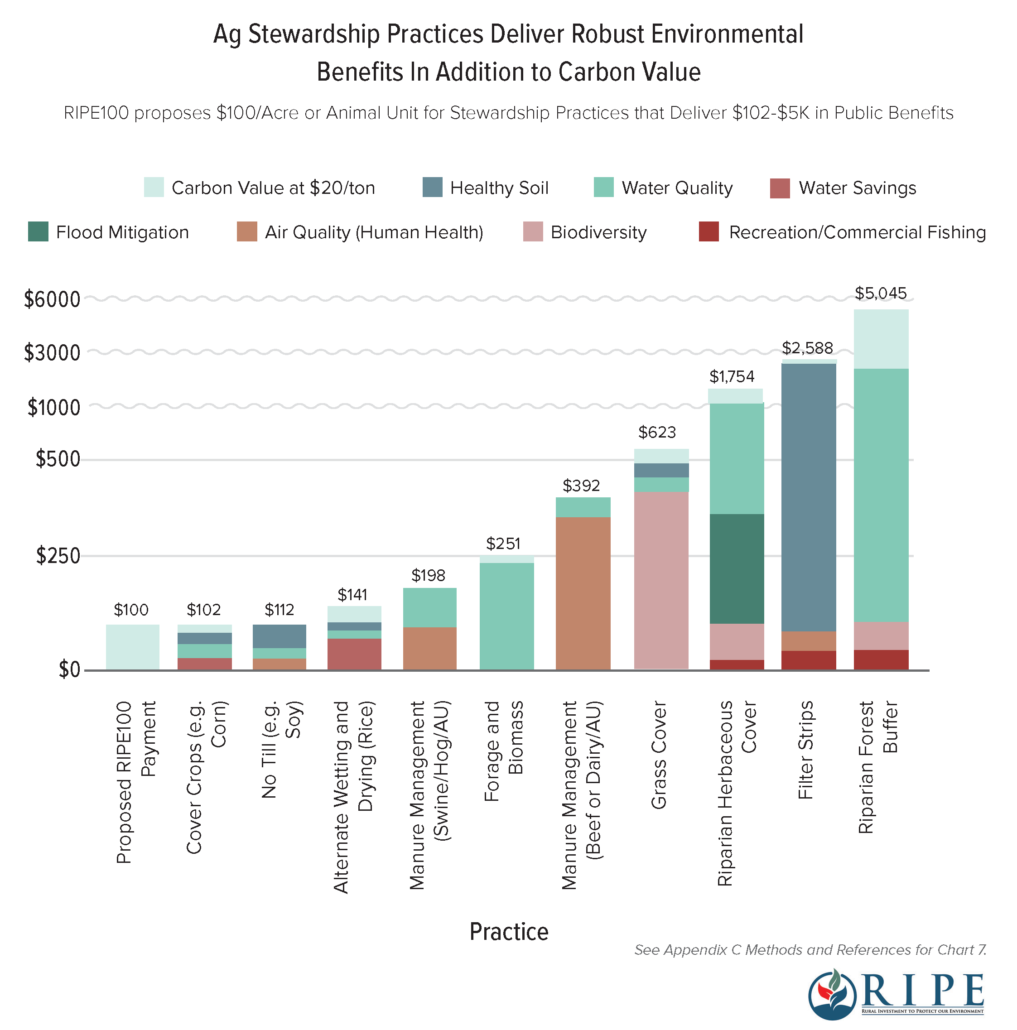